Take advantage of the honeymoon period! 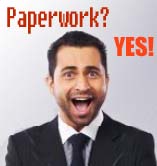 I recently heard from Will, a former ADHD Coaching client who had branched out to start his own business.  It didn’t surprise me to hear that he’s doing well and feeling a new burst of motivation in his work.  He commented that he was no longer bothered by the ADD / ADHD tendencies that had been a problem at his job.

Back when I worked with Will, he had been a corporate trainer affiliated with a small training / consulting firm.  Although client companies were pleased with Will’s work, he was no longer enthusiastic about his job, and found his ADD traits were becoming more problematic.   He fell behind on expense reports and billing, and found himself procrastinating on creating the training he was hired to do, which often meant he had to work late nights in order to meet deadlines.

Will felt increasingly drawn to wanting to help non-profits and smaller companies where he could really make a difference.   He researched the field and found that there was a training niche that was not being filled in his area.

I encouraged Will to take on additional freelance accounts where he could, start a website for his services and begin blogging about the particular training issues facing non-profits.  Slowly he started to build a blog following, as non-profits began finding him online.

Now, nine months after we had last spoken, Will wrote to say he was reveling in being his own boss, serving the kinds of clients he wanted to work with.  His entire attitude about his career had changed.  He was most excited that he no longer put off doing his work.   Like magic, the procrastination problem seemed to have disappeared.

Of course, the answer for the Will’s sudden lack of procrastination lies in his new enthusiasm for entrepreneurship.  For now, this excitement is carrying over to every aspect of running his business, including invoicing and routine paperwork.  As long as Will feels motivated, he isn’t plagued by procrastination.

You may have seen this happen to you when you’ve changed jobs or professions.  In personal life, it can happen when you begin a new relationship or move into a new house.  When you're suddenly more motivated to keep things neat and organized, (for a while) clutter isn’t such a difficult problem.

How can you make the “honeymoon” last?

Alas, anything new will eventually become more routine.  And once that happens, and the “honeymoon period” of being an entrepreneur is over, invoicing will no longer be interesting or exciting.  So unless Will is ready for that day, the old ADHD tendencies may creep back.

This does NOT mean Will is doomed to procrastinating on paperwork, or letting details fall through the cracks for his clients.  It means he’ll need a system, plan or strategy for dealing with these things to make sure they won’t happen.

If you’re in a honeymoon period of your own, it could be the perfect time to form those habits now.  If you wait until the motivation and excitement has died down, you may start to slip back into old ways.

Although the excitement of a new situation will eventually wear off, the productive behavior that results doesn’t have to.

Did you ever find yourself in a new situation where your ADHD challenges seemed to go away?  Were you able to make it last?

Years ago before I knew I had ADD, I took a Meyers-Briggs Personality Type (MBTI)Inventory workshop and the results showed I was deficit in detail-orientation. At that point, I started taking notes regarding anything that was multi-steps or full of details. That helped me to also focus on what was being said at the time and I have used that method for almost 30 years now. When I learned I had ADD, I went to a coach and a counselor and learned many techniques, also tried medication for awhile, but that didn’t work for me.

I have no doubt that I have ADD and it affects me in many ways, but I just went back to school and completed a degree program with a 3.91 GPA and graduated at age 62! I never dreamed of being an A student; I never even believed I could complete a degree or attend school and pass. I know many people wih ADD/ADHD that have made little, no attempt, or gave up trying. All I am saying is that we should never give up on ourselves and that taking workshops, working with a professional and continuing the process of overcoming ADD/ADHD is a lifelong process but worthwhile.

I am so grateful today for all I have learned and that there are great coaches out there like Bonnie that CAN make a difference in our lives. Thank you, Bonnie, for all you do!!

Jill, you are truly an inspiration! Thanks so much for the kudos.