A Cautionary Tale of Two Calendars 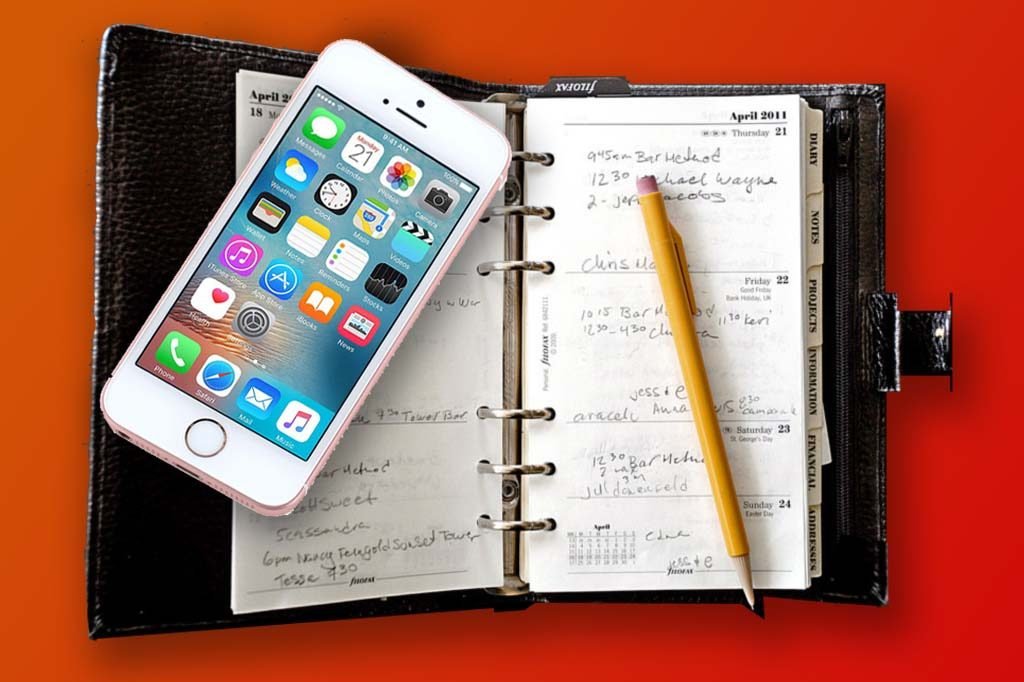 For someone with ADHD, two is not better than one!

Despite doing business online, when it comes to technology, I'm quite a dweeb.  I've been using the same old Blackberry for years, even though every time I've had to go to the Verizon store to get it looked at, the salespeople are incredulous that I decline the “free upgrade.”

Technology upgrades are never free.  They come at quite a cost, in terms of my TIME.  They take time to download, time to learn, time to work the kinks out, time spent on the phone and/or online trying to figure out why they don't do what they're supposed to.

This is why, when I finally broke down and bought an iPhone, it stayed unopened in the box for more than two months.   I didn't want to take the time to get it activated and learn to use it.  I love “shiny new objects” as much as the next ADD / ADHD person, but gadgets just aren't my shiny objects of choice.

Nevertheless, last week I finally got it up and running.  Because I was so accustomed to using the calendar on the old Blackberry to enter all my appointments, I felt clumsy entering them in the new iPhone screen.  So I kept both devices on my desk.

What a mistake!  When a client asked to reschedule his appointment time, out of habit, I entered the change into the Blackberry.  By the time the appointment came up, I was using the iPhone which still had the originally scheduled time.  I was just lucky I hadn't double-booked.  It was a perfect example of why I've always cautioned my clients against using two calendars, even if one is for business and the other for personal time.  Unless you can count on absolutely religiously syncing them up together at least once a day, something is bound to fall through the cracks.

It was also a good example of how once a habit is ingrained, it becomes easy to perform an action without having to think about it.  With ADD, so many of us are likely to overlook things such as neglecting to shut cabinet doors, put away files, or make calendar entries.  But it's possible to change the habit with enough conscious repetition, if we decide we really want to.

After my embarrassing scheduling mistake, I put away the Blackberry and — through repetition — have become more comfortable with flicking my fingers at the iPhone calendar screen.

I still haven't learned to talk to “Siri” though.  Maybe next year.

Coming up next… Training to transform procrastination!

Categories: Blog, On the Job, Planning and Scheduling

I enjoyed your post, as always. Thank you for putting important things in BOLD so that we ADD folks catch the important stuff!

I’m such a “skimmer,” I guess it’s a holdover from highlighting all those college textbooks to make cramming easier!

Hey Bonnie – I too just purchased an iPhone. I also have a Google account with email and calendar. It’s always frustrated me that I cannot sinc the many calendars of my life – work, household, child, travelling husband, and 2 organizations I volunteer heavily with. Imagine my surprise when I learned last week of an app called CalenMob that sincs with my Google calendar! I’m very excited about the POSSIBILITIES including less data entry on my part. YEAH!!!

Thanks for sharing the CalenMob app! Click here to read about it.

Perfect! Except — I have android. Can anyone suggest an app that syncs MS Outlook w/ Google calendar?

It’s always hard to switch to new technology. Old habits are tough to break. I think though for us ADDers the effort to learn is usually worth getting over the paralysis that we feel.

I do my best not to buy the device before I’m ready too take on the task.

For others having it stare at them for a while is what it takes to build the courage to open the box.

Either way there is a blockage to overcome.

I’m looking forward to the training.

Bonnie, you are, once again, a lifesaver! Thank you!!

Bonnie,
You’re right on as usual! Luckily I learned the one calendar rule a long time ago, but I sometimes get distracted and only enter the time! Then there’s the guessing game, and embarassingly having to call people and ask, “Did we have an appt. @ 10 on the 12th? ” LOL

I’m actually pretty mechanically inclined, but technology is a “black box”! Still using a 10 yr cell despite being given a newer one. I also have an unopened 4 yr. old box with portable phone set up with all the bells & whistles! Dread he “learning curve” you so aptly described!
Thank you so much!
Cheryl
P.S. Does this system have spell check? & What are “HTML tags & attributes?

As an ADHD adult- I get the bright shiny new toy thing. I also know I need technology because it really can organize all this little bits of info for me. I use an iPhone and despite my love for outlook have switched over to gmail and google calendars. It synchs with all smart phones. Then I use tungle.me for appointment booking. Check it out. Clients reschedule their own appointments. I accept or decline. It synchs with outlook and google calendar seamlessly and saves a ton of time. Then I have added tripit.com which synchs with all three for my travel details. All these keep me on track. They took about 2 hrs to set up but save me about 2 hrs every week. So it is well worth the investment. I also help clients with this process so if you need any help please feel free to contact me!

Mandie: Thanks for the great recommendations!

I cant even stick to one calendar…every now and then i try to start off afresh, marking my calendar and setting up schedules…yet i guess i am too lazy to do it regularly…:(

Any one use both
Work outlook and personal gmail ?