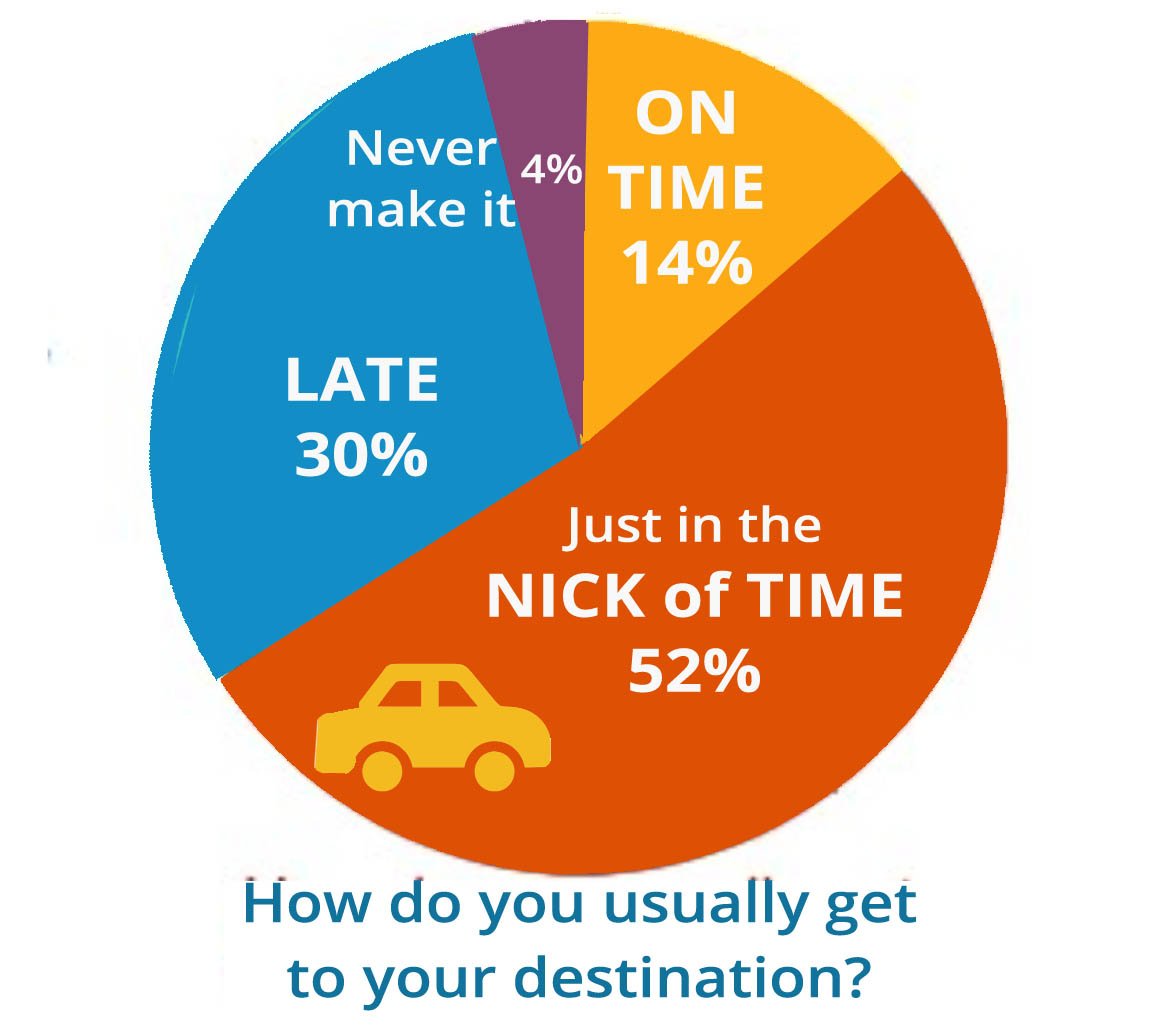 Who just drove your brain into the ditch?

If much of the time that you started out in your car, you ended up stuck in a ditch, you would want to know what kind of driver had caused that to happen, right?

I wanted a way for ADD / ADHD Adults to quickly identify what seemed to derail them in different situations. So I asked you recently to take a 2-QUESTION SURVEY called “Who Drives Your ADHD Brain?”

In the survey, you were to imagine your brain as a car, with a team of quirky characters as drivers.   Your tasks and projects were destinations, with a goal of getting there by a deadline.

The first question asked how you reached your destination most of the time.

Only 14% usually got there on time, meaning they completed tasks on deadline without chaos and drama.

That meant everyone else did not!

In getting things done, 76% of ADHD respondents, are stressed out or failing most of the time!   This is a pretty dicey state of affairs, but the only way to improve is to know what is causing the problem.

So, which of your quirky drivers tended to take the wheel of your car (your brain) most often?

Was it Disorganized Derek, who forgets the address and leaves his drivers license at home?

Or Emotional Emma, who has a meltdown at the thought of calling for directions?

Or Impatient Iggy, who gets pulled over for speeding?

The results were a bit surprising! (Click Here for the Survey Results Report.)

The main ADD / ADHD driver was “Overwhelmed Oscar.”  When faced with too many places to go, he pulls over and turns to another activity altogether. So it makes sense why he doesn’t get places on time.

What I found surprising was the fact that Overwhelm was listed as a primary driver by 70% of the respondents – FAR more than the next highest option! 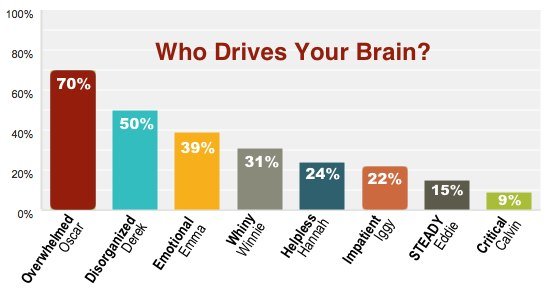 Here were the exact figures:  (Click Here for the full Survey Report)

70%     OVERWHELMED OSCAR – Shuts down when there’s too much

24%     HELPLESS HANNAH – Wrings her hands and does nothing

In February 2012, I surveyed ADD / ADHD people to ask what kept them from getting started in the workplace.   The results then showed Overwhelm in 3rd place, with 42% choosing it as one of their top problems.

Are we that much more overwhelmed now than we were three years ago? If so, why? And what can be done about it?

During my 14 years of ADHD Coaching, I’ve learned that a lot of overwhelm comes about because of disorganization.   Much disorganization is a result of impatience. Impatience goes hand in hand with not feeling like doing basic maintenance such as putting things away where you can find them.

In other words, in order to really help Overwhelmed Oscar, you may also need to deal with Disorganized Derek, Impatient Iggy and Whiny Winnie!

Does your feeling of overwhelm more likely to create a problem, or does another problem create your overwhelm?

Hi Bonnie.
After thinking about who drives my brain I can definitely say that the feeling of being overwhelmed creates the problem, which leads to procrastination and avoidance. It’s a cycle that is very hard for me to break free from.

I think overwhelm and shame are probably the toughest to break out of unless you have tools to do it. With overwhelm, it requires first being able to feel as soon as you’re overwhelmed, and then taking steps to break down the project into small pieces. At least some of those pieces will probably be easy to do, so you start with those easy ones. Get to the point where you have it clearly defined what you have to do, and what steps you might have problems with.

Hi Bonnie – I didn’t take the survey but would definitely agree that it’s overwhelm for me. And I love how you took it 2 steps further to explain where it comes from. It makes so much sense!
So now I will focus on forcing myself to do basic maintenance. If I had been doing daily maintenance all along I wouldn’t be “stuck” today.
Thank you for leading us to a logical conclusion that is simple to understand and I can work with. Understanding, for me, is a huge part of the battle.

Carol, you got it… understanding is so critical. Without understanding what we’re dealing with, we just bumble around!
Basic maintenance definitely brings out the “Whiny Winnie” in me. Instead of forcing yourself to do tedious tasks, try flowing into them with something pleasant first — forcing yourself makes it so much harder.

My fiance keeps telling me I need new information. Information provides the material for my choices and beliefs. That is what came to me when you were speaking of understanding. If I understand I will gain new information and be able to make different choices. I might even be able to quit driving myself nuts – let alone everyone around me

Corajayne, you’re on the right track. You need understanding of what’s happening with your choices, and why you’re making them (what “character” is driving at that moment). You also need information / understanding of what to DO about it; how to apply new tools and strategies to yourself so that you reach the results you want.

I’m feeling overwhelmed just reading it! I have such a fear of failure that I stall, stall, and avoid until the last possible moment. Then I drive myself and my husband nuts trying to do the impossible in such a short amount of time. There is a good deal of shame connected to this. I wonder if I think subconsciously, “I could have done an excellent job of this if I had the time.”? This way I haven’t really failed, cause I haven’t really given a good try. And, yes, all of this causes me to feel overwhelmed.

Peg, is it always fear of failure that makes you stall? I wonder if it’s sometimes “Overwhelm” that holds you back as well, or a feeling of “all or nothing.” See if you can break down the action into smaller pieces and start on the easy ones. Consider each little piece that you get through as a victory. Getting started might make it easier to keep going and do the part you’re afraid of.

Hi, I think it’s the feeling of overwhelm that gets me into more trouble than the other way around. It’s that all or nothing thinking. And the weird thing is that I usually have less on my plate than the average person – I go to school and don’t even have a part-time job. But when people see my schedule, they tend to go “Whoah! You have a crazy schedule!” Is that because I’m actually doing more than I think I am? Or is it because I write down things on my schedule that other people just keep in their heads (like weekly meetings and to do lists). It’s true also that I want to do SO many things – at school I’m like a kid in the candy store: “Oh I want to do that, and that, and that, and that…” then I usually don’t end up having the time or energy to do them, so I feel like I’m failing, even though it wasn’t really a committment to begin with.

It sounds like you’ve identified why you feel like you’re “failing.” Here’s how you can stop that habit:
Look at one week of your schedule, with all your to-do’s entered. Next to each one, write how long you think it will take. (If you’re not sure, take a week and TIME your activities!) If you put down how many minutes next to each activity, and add in transition and travel time, you’ll be able to see if your schedule is realistic or not.

Once you prove to yourself that your schedule is NOT realistic, you’ll realize there’s no failure in being unable to follow it.

When i take medication for ADHD it’s shocking sometimes to realise how all the symptoms are basically spiralling out of control every day, each causing a set of endless problems that you never proactively rectify . your chronically stressed, and on a daily verge of overhwelm , but you are so driven by the symptoms , you just cant slow down and organise yourself .

Yes, it’s interesting to find once you take medication how much difficulty you had without it… and you’d thought those symptoms were normal (doesn’t everybody have to get up 5 times in an hour?)! I’m putting out overwhelm training this month, but — if the word “overwhelm” didn’t exist — think of what other issues cause stress or roadblocks.